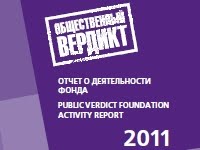 This report reflects some of the key activities and achievements of the Public Verdict Foundation in 2011. The programs described below are part of our mission to promote respect for human rights and liberties in Russia. Our strategic objectives are:

- to strengthen the guarantees of individual rights and liberties and to ensure that every individual is protected from abuse;
- to advance and strengthen effective mechanisms of civilian oversight over the law enforcement practices;
- to advocate for a comprehensive, systemic reform of the law enforcement agencies based on respect for human rights principles and standards and including consistent and mutually reinforcing change of police performance appraisal, administration, human resources policies and training;
- to integrate international standards for law enforcement practices;
- to introduce and expand comprehensive rehabilitation for victims of police abuse, so that every case of abuse may be recognized, perpetrators brought to justice, and victims may access fair compensation and psychosocial assistance and support.

The Ministry of Interior reform continued in Russia in 2011 with a number of new developments: the Law on Police came into force; militia was renamed to police; the police force was restructured; police officers had to pass a test to continue their service; the Ministry of Interior issued a series of executive orders to update the rules of reporting and performance assessment, and to provide for central and local Community Advisory Boards.

The Public Verdict Foundation has been actively involved on behalf of Russia's civil society in the reform of the law enforcement agencies, in particular the Ministry of Interior. The PVF has coordinated and actively contributed to the activities of the NGO Working Group on the MoI Reform. We have made proposals towards new laws, presidential decrees, and ministerial orders developed and adopted as part of the MOI reform; we have closely followed the personnel testing and certification process and the formation of Community Advisory Board; and we have been vocal in our criticism. In autumn 2011, the PVF presented a methodology for monitoring the local implementation of the Law on Police, and led the Working Group on MoI Reform in carrying out such monitoring.

In 2011, the PVF continued to offer legal, informational and psychological support to victims of police abuse. This is our core activity, and it also serves as basis for other programs, such as analysis and preparation of reviews and reports for the Russian and international bodies. Last year, we decided to increase our presence in social networks and used them to promote our values and share our achievements.

We completed two surveys in 2011 producing a series of findings that may be very useful for advancing the law enforcement reform. The first survey was about the police performance assessment, and the other one focused on standards for the effective investigation of torture and cruel and inhuman treatment. Our research is generally based on fieldwork; we do not rely on external analysis, but prefer instead to learn about current law enforcement practices first-hand by interviewing investigators, police officers, prosecutors, judges, members of city administrations, and other practitioners. Our program of field research is one of the few independent research programs in Russia focusing on the law enforcement practices.

Also in 2011 we continued to offer training seminars to members of the Russian Investigative Committee on international standards for the effective investigation. We mapped our findings of detention conditions and their conformity with standards established by the ECtHR judgments, and members of local Community Supervisory Boards (SCB) in a number of regions have been using this map as a monitoring tool.

The PVF has been active internationally, as well as in Russia. We were among the founders of the EU-Russia Civil Society Forum, and the PVF Director now serves on the Steering Committee of the Forum. The PVF experts have given presentations at international conferences in Moscow, Paris, Yerevan, and Washington, DC.

This report provides details of the activities outlined above, and many others.

In 2011, the Public Verdict Foundation was supported by The John D. and Catherine T. MacArthur Foundation, the Open Society Institute Assistance Foundation, Oak Foundation, the European Commission, the UN Voluntary Fund for Victims of Torture, the National Endowment for Democracy, the Norwegian Helsinki Committee, and by private donors.