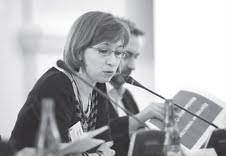 Natalia Taubina, director of the Public Verdict Foundation (Moscow), reflects on what we can expect from the new head of Russia's Ministry of Internal Affairs.

SibInfo correspondent Aleksandra Cherdantseva: Natalia, [Russian Minister of Internal Affairs Vladimir] Kolokoltsev has already told the press that he is determined to continue to carry out reforms. How successful do you think he will be?

NT: At present, we can only judge the new Minister on what he has said to the press. It's true that he says that the reforms will continue, noting that the legislative basis for the reforms has now been created, so it is time to adjust the structure. By the looks of it, he has some organisational decisions in mind, which will allow the situation within the Ministry of Internal Affairs to improve.

In general the new Minister is someone with 'real world' experience - he knows the system from the inside. Let's hope that he is still in touch with the reality of the situation, and that he will put measures in place to improve it.

AC: What about the system for evaluating the work of police officers?

NT: He says he is firmly opposed to the 'points system' and to basing evaluation on in-house statistics. I would like him to use this conviction to break the deadlock surrounding the problem, to develop fairer indicators that allow the quality of the work to be evaluated. After all, it is backed up by both international experience and expert studies from within Russia.

We need a serious approach, so that it doesn't turn out as it did under Rashid Nurgaliyev, where in the space of two years at least three orders were given for new approaches to evaluation. Every time it was declared that we had seen the last of the 'points system'. At the same time, it is clear from the decrees and related instructions that in-house statistics remains the basis for evaluation.

AC: In general, do you think the outlook is entirely positive?

NT: In actual fact, his declarations about decentralising the system make me feel slightly wary. He says that decentralising the municipal police did not pay off when it was tried in the 1990s. However, I have not seen a single piece of analysis to back this up, and I have strong doubts in this regard. It is possible that back then the work was badly organised.

Also, Vladimir Kolokoltsev's words contain several contradictions. We are not suited to decentralisation, yet we have to take into account regional differences. How is that possible without decentralisation, without tailoring policy to the regions? I believe that the municipal police have to give this experiment another try.

AC: Besides continuing with reforms, the head of the Ministry of Internal Affairs believes that improving the prestige of the service is essential. Is it possible?

NT: I think so, yes. But it will require the management not to waver in their commitment. Firstly, they must not break the law, and they must treat any infringement by the police seriously, regardless of whether it is a criminal offence or simply a breach of discipline. If the public sees not only words, but also practical action, this will already be a step in the right direction. Secondly, work must be done on security enforcement - or in other words, on reacting appropriately to citizens' requests, both in terms of crimes committed, and in maintaining security during public events.

It must be clear that the police are working for the public, and not to serve the interests of the authorities.

The same applies for the issue of staff training. The training system for officers needs to be modernised, based on practical work, on dealing with the specific situations that police officers face every day whilst performing their duties.

AC: Natalia, could you highlight a particular regional variation in the work of the police? How, for example, does Siberia differ from the rest of the country?

NT: In our work, as well as representing the interests of people who have suffered at the hands of the police, we also carry out research into the work of the law enforcement agencies. As a general rule, the regional authorities in Siberia, and particularly in Krasnoyarsk and Barnaul, are the most inclined to cooperate with human rights organisations. This, I think, is a positive sign.

What's more, if you look across the country, the Ministry of Internal Affairs Public Councils are also strongest in Siberia. In the Krasnoyarsk region the heads of human rights organisations are represented on the regional council, and perform an active role there. The Altai region also has quite a strong council, which means it can work objectively, and at times even critically.

AC: Do you think there will be a fundamental change in the police in the next few years?

NT: It's difficult to say. Of course, Kolokoltsev will need some time to get to grips with things. At the moment we've only heard his intention to continue the reforms, and this will predominantly mean structural and administrative changes. Furthermore, he has made it clear that there will not be a complete reassessment of the situation. I would like to hope that they will start to work on optimising elements of the training process, on work with their staff. I don't think this will begin tomorrow, nor the day after, but I hope that steps towards reform will be obvious within the next few months.

Looking beyond police reforms to more general reforms to the security services, important changes may occur within the Investigative Committee. A new department dedicated to investigating official misconduct committed by law enforcement personnel is to be instigated. From our point of view, this is a positive step - after many years of human rights organisations, including those from overseas, recommending that this type of crime should be dealt with by a separate group of people, finally the head of the Investigative Committee has heeded our words.